The Space In-Between: The Silver Lining of a Toothless Smile 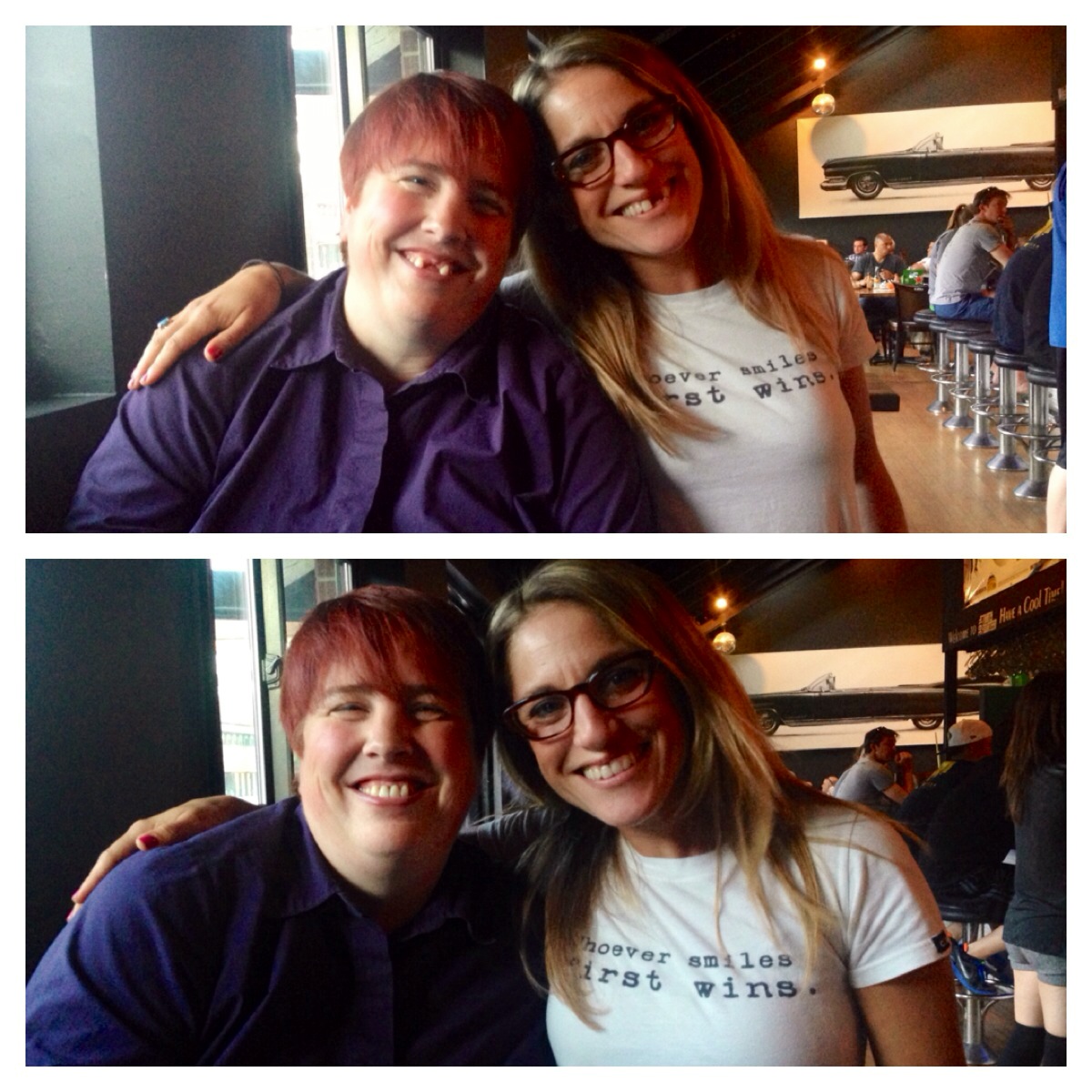 There are countless ways, every day, we have an opportunity to do something we feel called to do, having no clue of how far that act will carry on into the life of someone else. This story begins with the blog I wrote in May 2014, “Top 5 Lessons Learned from Losing my Two Front Teeth” written with hopes to shine some light (and laughter) on the loss of my two front teeth. Since I referenced Brene Brown and her book, “The Gift of Imperfection” in my story, I tweeted it to Brene, fingers crossed she would read it. Not only did she praise me for my strength but she graciously re-tweeted to it all her followers! As a result, a number of people around the world found my story and reached out to thank me for my vulnerability. Talk about a “Gift” coming from my “Imperfection”. As I always say, people tend to show up as Silver Linings in our life. The story below was written by Kim Haller, (@xperiencelife22), a 43 year old Denver Resident who is one of Brene’s twitter followers that connected with my toothless smile.

“Just a over two months ago I was scrolling through my Twitter feed and came across a post from well-known speaker and author Brene Brown with a link to a blog entitled “Lessons Learned From Losing My Two Front Teeth.” I was immediately intrigued as I myself lost my two front teeth to a softball injury in the late 1990’s. I clicked the link expecting mostly an interesting read – it turned into something much more meaningful. After reading the story twice, I was struck at how Carlyn turned a traumatic injury and healing process into something positive and fun! Since my injury, I’ve felt embarrassed- like I was abnormal and have tried to hide the fact that I wear a partial. Carlyn’s story touched something deep in my heart…perhaps it was time for me to have a change in attitude as well. After all, my missing teeth are a part of me, part of who I am. Just for kicks, I opened Carlyn’s Twitter profile and was amazed to see she lives in Denver! I mean, really – what are the odds?!? I sent her a message and shared that I was also missing my teeth. She immediately suggested we meet and take a picture of our toothless smiles. In a total out of character response I said, “I’m game!” We made plans to meet the night before she got her permanent bridge, the last night she would eat with her teeth out.

I’ve been wearing a partial for 17 years. The dental work is very expensive and I’ve lacked motivation to make it a priority. Only now I realize that I held a deep belief that I wasn’t beautiful before I lost my teeth, so why bother to get them fixed. On the day before we met, I took a toothless selfie and sent it to Carlyn. Her response – “OMG UR AMAZING – & Beautiful!” and that part blew my mind. I’ve been journeying towards accepting that I am beautiful – her response was like the final flip of the switch, I actually began to believe it and to accept it in my own heart.

Not a risk taker by nature, meeting Carlyn in person was very much out of my comfort zone. However, my anxieties were put to rest as she greeted me with her big smile and hug. After just a few minutes she no longer felt like a stranger. Her vivacious spirit and love for life are contagious! She suggested grabbing $1 tacos around the corner, which gave us time to get to know each other and eat good food, her’s with her teeth out. As we were getting ready to leave, I did something I’d never done on purpose in public – I removed my partial (my temporary two front teeth)! We took a beautiful picture both toothless and with teeth in!

I left that evening feeling inspired, accepted, encouraged and filled in my spirit.
Anais Nin said:”Each friend represents a world in us, a world not born until they arrive, and it is only by this meeting that a new world is born.”

Carlyn is no longer a stranger, but a friend. A friend brought into my life by the space in between my two eye teeth 🙂 Her arrival in my life has indeed helped open a new part of my world. We’ve only known each other a couple months, but I know we will continue to be less stranger and more friend…
Thank you, Carlyn for the courage to share your story. It has inspired in me the courage to share mine.

There is a lot to learn from this story. First, I learned that by gifting the world with my story, I received the gift of amazing friendship (s) in return. What if I had allowed FEAR to hold me back from writing my blog? Would we have met? Another beautiful reminder is that we connect with people for a purpose & it is always on time. I had no idea the transformation process Kim had begun only months before our meeting and I’m honored to be a part of her journey. Finally, just like the act of living true to myself pushed me into the lives of those that were meant to read my story, the same can be said for the small act of encouraging another and how it can (gently) push them outside their perceived limitations to take on challenges they never thought possible. I thank Kim for surprising me with this beautiful- and vulnerable story. However, I am even more proud that through this experience, she is realizing that only her mind holds her back her from being the version of herself she wishes to be. Telling ourselves we “can’t” is a sure way to feel unworthy and keep us from accomplishing a goal. So… I was amazed when Kim, someone who is a tad shy and working hard to shed some weight, decided to sign up for my HIKE MS event, a hike up Keystone Mountain (over 10K ft in elevation) to raise money for Multiple Sclerosis, a cause close to my heart due to a personal diagnosis 16 years ago. There were a couple hikes to choose from and Kim chose to do the 2 miler route believing this was all she could handle. But through the encouragement of me and my awesome team mates, not only did she conquer the 6 mile route, she did it all by herself, never giving up on what she knew, deep down, she could achieve, no matter how long it took her, no matter how hard it seemed!

Cheers to the Silver Lining of a Toothless Smile!