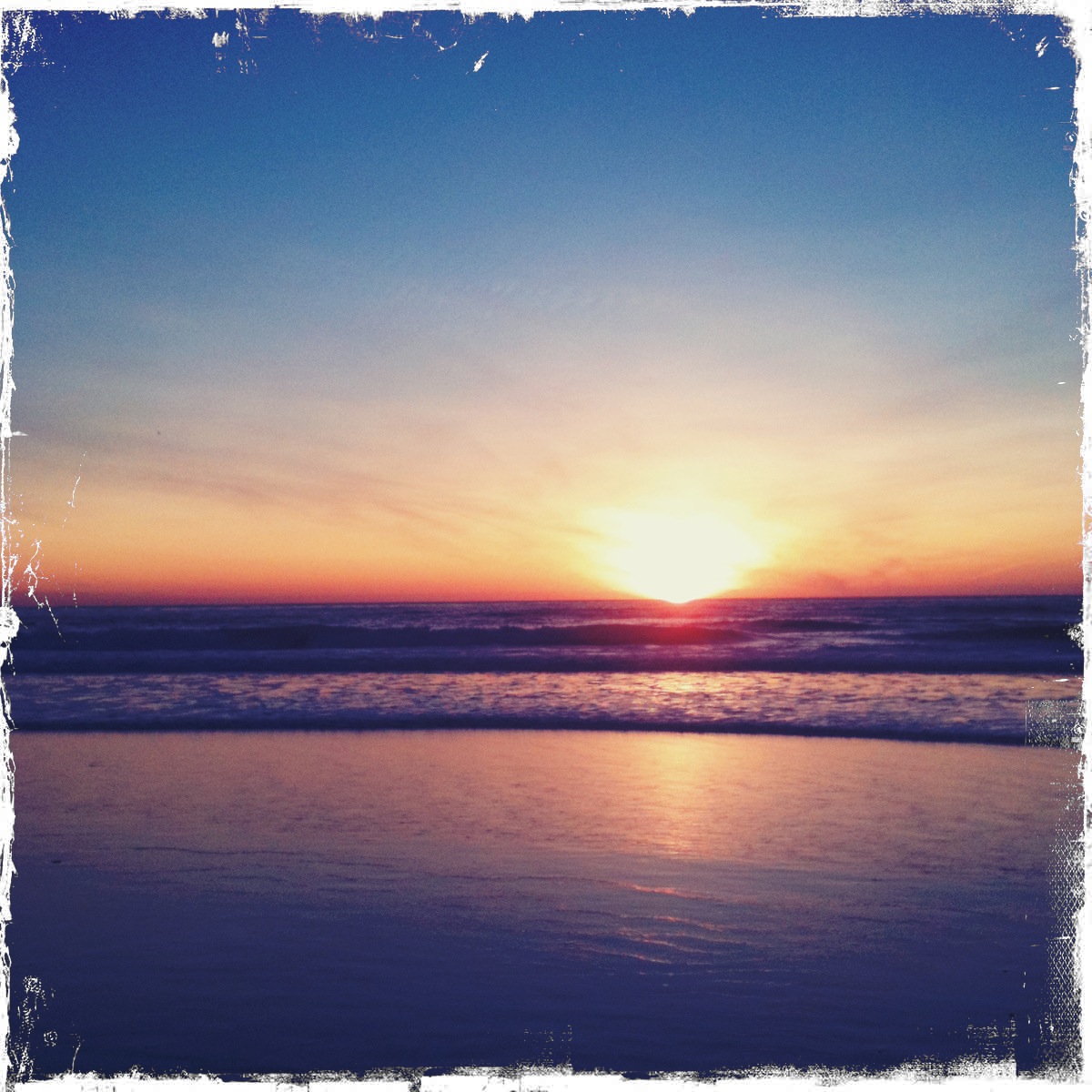 Since I have not written in detail about the past few months in my life I will sum up how I came to this next Stranger to Friend moment. To make a very long (exciting) story short, I left San Diego, CA on Jan 14 to embark on a six week Cross Country Road Trip to start my next chapter in life. I decided to move to Wilmington, NC, for reasons I find very valuable.Â  First, my parents would be within a 3-5 hour drive. This is close enough for me to drive home for a weekend, but too far to be able to make it for a last minute dinner… which, is preciselyÂ  the distance I wanted for myselfÂ  🙂 Plus, I’d still live on the water;Â  not to mention the Atlantic is much warmer than the Pacific and over flowing with sea shells! In fact, Wilmington and San Diego are on the exact same latitude so I was literally moving to the other side of the country– from one coast to another. And last but not least, for the cost of my rent alone in San Diego, I could pay for my rent, utilities and COBRA insurance- and at this day in age, THAT is money! But, this journey was not just about moving from CA to NC. I was letting go of my life with Corporate America and setting out on a brand new, solo adventure that would allow me to pursue my passion. Within days of deciding to make this move a reality, I received a perfect map in the mail from the Sierra Club… which I pinned to my wall and began to map out what I would call, my “Stranger to Friend Journey”.Â

The blue pins indicated the Start and Finish. The red marked the cities I hoped to stop in for a visit with dear friends and of course, creating a place to stay and the chance to spend quality time with people I love and the yellow pins were the “maybe markers”. By the conclusion of my trip I would stay in 15 cities– with many pit stops along the way. My goal was to create a trip that allowed me to slip into the lives of my friends I love and miss, and in return, they would be the friends to help guide me to my next chapter in life. I wanted to feel the greatness of the Rocky Mountains,Â  the majestic Plains of Wyoming; watch the Super Bowl in Dallas, cross the Heart of the Mississippi River and eventually cruise through the Carolinas into my brand new town. And of course, I would be armed with Stranger to Friend cards to meet amazing people along the way!

Perhaps one of the best decisions I made before leaving was to incorporate “my boot” into every stop. My Bestie, Tina Kroger had literally… Given Me The Boot! Aside from being my muse as to why Wilmington was the city of choice (another story all in itself), and her role assisting me with finding a place to live, a way to ship my belongings and be able to financially make it all work, Tina had in fact, given me a boot: A Glass Pint Sized Boot! If you have seen the French Film, Amelie you know about the gnome. Every where she stopped she took a photo with the gnome to mark her travels. So, I decided to do the same thing with my boot. Only, rather than just a picture, I would add a little spice to the idea and have a drink in it, whether it be beer or sweet tea, a beverage of choice would capture what I was feeling in that moment, in that city. And, what I would soon discover, is that the BOOT would kick open the door to conversation with all sorts of people curious about why I was carrying my own pint glass shaped like a boot around in my purseÂ  🙂

So on my first full day on the road, after a picturesque drive from Santa Barbara to San Luis Obispo on the 101, I hoped on Highway 1 to tak

e on the rugged Pacific Coast. Stopping for a scenic stretch at Moonstone Beach in Cambria, I was overcome with a sense of freedom. Standing on a beach, no end in sight… I took it all in like a little girl and smiled with excitement… and I knew that it was only the beginning.Â  The only planned stop I had was the Julia Pfeiffer Burns State Park for a short hike and to lay my eyes on a protected waterfall!Â

And, wow… it was everything I hoped it would be and more! Aside from the 78 degrees weather in the middle of January and not a cloud in site, no matter which way I turned, the view was exquisite.Â Â  After leaving here, I was back on the road… without a plan… except to catch the sunset somewhere special! Due to the fact that I was forced to drive on the meandering road for the next hour and a half behind a lovely bunch of motorcyclist, I was unsure where I would be for the magical moment. But alas, I ended up being EXACTLY where I was supposed to be: Carmel, CA.

With literally 10 min to spare (I looked up the exact time of Sunset on my iPhone), I parked my car and ran down six blocks to the beach. With 200 or so fellow lovers of Mother Nature sharing the sand with me, I was literally moved to tears as I watched the beautiful, powerful and always mighty sun, slip behind the Pacific.Â  Everything about the day had been perfect. From the gifted tunes that soundtrack’d every scene, to the kodak moments I managed to capture… down to the surprising text and phone calls from friends along the way. I had endless reasons to celebrate! And, what better way to toast the evening: an ice cold beer.

As destiny should have it, I did not stop in the first bar I stepped into, nor did I stop in the second. I found myself drawn to the third little spot across the street, the charming old-timey diner, Em Le’s. As I sat on a squishy red stool, scanned the selection of brews (and yes, the Ravens and Steelers Game was playing too!), and casually pulled my glass boot from my purse and placed in on the bar. Immediate reaction from the bartender: a chuckle! And this is where I met Jimmy, the bartender. Having traveled solo for the entire day, I really welcomed the face to face conversation. He was very intrigued about my travels and the reason for the boot but even more so, very impressed that I was, in his eyes, so brave and fearless to take on the journey. He seemed to hang on to the words of all of my stories that I had already experienced as well as the dreams I hoped for along the way. Seeing that it was only Day One, I was giddy with anticipation of what lay ahead.Â  It was not a one sided conversation as Jimmy told me about his life too. But, it was quite clear that he was inspired by my decision and quite honestly, taken back that that I was a young lady embarked on this journey of uncertainty. Before leaving, I gave him my “Turning Strangers into Friends” Card and gratefully thanked him for sharing his time with me while I had a beer and savored the sweet day. And yes, I told him to stay in touch.

Truth be told, I never expected to hear from Jimmy again. But I was wrong. My phone rang last night around 10 PM and although I typically don’t answer a number I don’t recognize at that hour, without hesitation, I picked up the call. At first, the voice on the other end was unfamiliar. But then with a smile in his tone, Jimmy reintroduced himself to me. For a split second I questioned his intention, but that silly thought quickly vanished as he proceeded to tell me why he called. Aside from the fact that he still in awe with my decision to follow my dream… solo, he was concerned for my safety traveling alone, knowing I would be introducing myself to “Strangers” along the way. He simply wanted to call and make sure I got to my destination safe and sound!

Seriously, I was shocked. After two months with out communicating, here he was on the other end of the line, sharing not only his relief that I had reached NC, but after I told him where I stopped along the way, I could FEEL his shear happiness he had for me and my adventures with the boot. Through my Stranger to Friend journey thus far, I feel I am the one that reaches out most often… but here was a compassionate man that cared, reaching out to me. And, I thanked him. I thanked him for believing in me. I thanked him for being a sign from the Universe, reminding me that I am leaving a trail of positive impressions. And of course, I thanked him for not hesitating to call me. Because I know, that is typically the FEAR that stops people from reaching out to someone they hardly know. I thanked him once more time and promised to email him the online photo album of all the many places I drank out of the boot 🙂

I learned a lot of lessons from this story.

1)Â  Remember to stop from time to time and take in the beauty.

2) Not having a plan is many times the best plan.

3)Â  (THE BIGGIE). Call someone to check on them.Â  Calling someone vs. Emailing or Text has a huge impact. You see, Jimmy isn’t on Facebook and hardly uses his AOL email address but that didn’t stop him from reaching out to me. To hear his happiness, the vulnerability in his questions, the realness in his responses…Â  is the giving and receiving that communication is all about. He was not only a highlight in my day in Carmel, but now a highlight in my day on my couch in Wilmington, NC. And I couldn’t be more grateful for him.