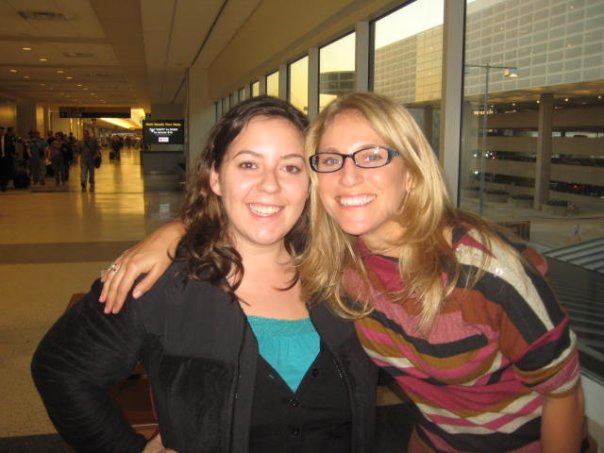 I LOVE stumbling upon new people while I am traveling! I can honestly say it is favorite way to meet someone… ever. Traveling offers the best excuse to strike a conversation- for whatever reason. It puts you on equal terms with everyone around you. You are all leaving one place to go to another. You are all in motion yet you all need to be exactly where you are at that moment in time to get to where you are meant to be. Funny how that happens. SO, one can say that when you meet people while traveling it is meant to be. How else can you justify a new friend as a result of a missed flight or seeing an old friend as a result of a 3 hour lay over.

This is exactly what happened to me on Sunday 🙂

Location: George Bush Intercontinental Airport; Houston, TX — considered a “city within a city”, consisting of 5 passenger terminals, the odds of meeting someone are well– slim to none, that is, unless it is destine to happen! En route to Little Rock, Arkansas via San Diego, I landedÂ  at Gate C 21Â  but soon realized my flight left from B 81 – 3 hours later. First on my list: Coffee. In search of a Starbucks I decided to go ahead and take the train to Terminal B.Â  With the sexy sound of my black heeled boots echoing along my stroll and my carry on suitcase as my additional accessory,Â  I headed forÂ  the train in pursuit for my caffeine fix.Â  That is, until I realized… there is no Starbucks in Terminal B!!! WHAT? It seemed like a cruel joke, especially since I was losing more steam by the second. To my dismay, the Starbucks was in Terminal C… gate 35.Â  With hours still to kill, I hopped back on the train. Why not, right? I was a woman on a mission.

Armed with my $4.05 Grande Skinny Vanilla Latte and Dark Chocolate Graham crackers in hand, I searched the halls for an outlet to set up camp with my lap top and pass the time away.Â  I found a table to share with another traveler at Gate 35 (who was more than happy to take the photo below), I connected with the free wireless streaming from The Presidents Club… and logged on to Facebook.Â  For whatever reason, I chose to update my status with my location… at the exact same time Rachel Zander turned on her Facebook on her mobile phone when landing at Gate 34 at the Houston Airport. What are the odds, right?

After a few “Wall Posts” back and forth ofÂ  “maybe we will cross paths, haha” but then discovering we were at the exact same gate, what turned into a cup of coffee was now coffee talk with an old friend!!! It had been at least 10 years since we had seen each other. Growing up, our families were the best of friends. Our Mom and Dad.Â  My brother and her sisters. Rachel being the baby of the bunch. Now, here she was, in Grad School at UNC getting her MBA in Marketing with a future internship at Hershey’s Corporate in the not so distant future…. and the last time I saw her she was a Freshman in High School, not to mention I think I taught her in Sunday School!Â  It was SO FUN to sit and chat as two adults, she heading home to kick start Spring Break and me on my way to kick start a new career.Â  We knew our Jewish Mothers would be filled with Nachas!

Leaving Rachel with a renewed traveling spirit, I headed back to B 81 to wait out the rest of my layover.Â  After a few calls to friends in the less crowded area before the Gates, I finally made myself mosey over towards B 81, only to realize I was now flying out of B 83… so I sat in the middle.Â  Seems logical, right?

For the longest time, no one sat next to me. Then, as if by fate, a lovely woman, a little older than my Mother,Â  with dangling Buddha earrings, reading a book on the topic ofÂ  Souls and the Afterlife, casually sat to my right. She didn’t notice that I had already noticed her book… but I had, it was the first thing I saw. At that point, I was curious and merely waiting for the right moment to spark a conversation. When the attendant began to ask for volunteers to give up their seats, I popped the question, “so what happens if no one gives up their seat?” This lead to her sharing her story of her day: she missed her 1 PM flight and 7 hours later… was patiently waiting, hence the reason she could not only NOT give up her seat, but a reason the flight was overbooked!!!Â  That’s when I pointed out that ‘it happens for a reason’ and she quickly assured me she already knew that. She followed with a story about the woman she met that day as a result of missing her flight. In the book store. Only 2 cozy seats. The woman also had a 7 hour lay over so they ended up having unch, shared incredible conversation and exchanged information before parting ways! Here she was, sharing her own Stranger To Friend story with me… so I then told her about my site… only… the wireless was not free??? What? How is it that it was free at the exact moment I was meant to be in touch with Rachel and now I couldn’t share my site? I was baffled… and it seemed to make the story that much better.Â  I then mentioned that I noticed the book she was reading and that I, too, have a Spiritual Medium. She didn’t need to tell me she did. I could already tell. And, I was right.Â  We were having an AMAZING conversation about life and friendship 🙂

By the time I parted ways with Sherie Lemnios,Â  my new Zumba Instructor friend that was originally from NY but called Norfolk, VA home, I had given her the name of my Medium she planned to call and she has also promised to write me on this website. Of course the internet didn’t work; I was not meant to show her my site, she was meant to find it on her own. She stayed true to her word… she posted a comment to my last blog post this morning- starting my day with a smile 🙂 I LOVE IT!

There are many ways we can try to plan how to spend a 3 hour layover. We can sit at a bar and enjoy a beer, people watch, shop for souvenirs,Â  talk to friends on the phone… but no matter what we chose, it still becomes a part of the journey… because, in the end, it is all part of the journey.

— on a side note, I need to mention Sherry Caldwell that I met on my plane ride back to SD last week.Â  With her Aussie Sweatshirt on her lap and freshly updated Little Rock accent, she was on her way back to Brisbane to finish her last 1.5 years of Grad School for International Business. SO…. if you need to cross paths with a cool chica in Aussieland, look her up! She emailed me this morning and asked me to be her Facebook friend.Â  Naturally, I accepted and told her we met so I have another excuse to head back to OZ :)Â  Let’s hope this journey continues, too!!!