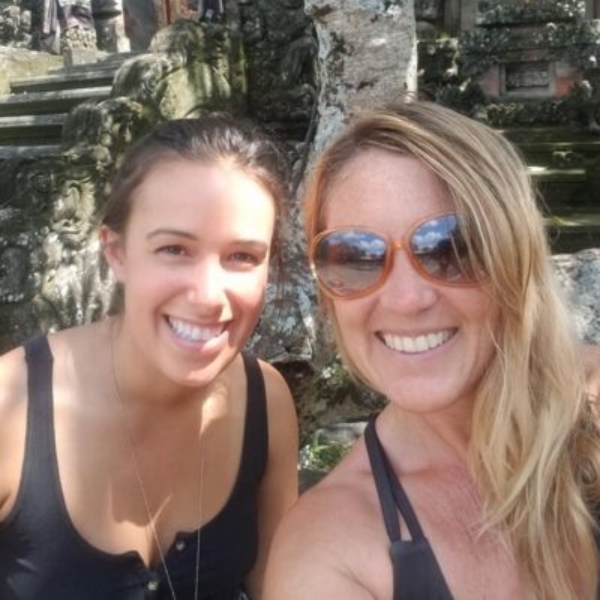 I’ve lost count of the number of times I’ve called my Mom, “holy moly, you’re never going to believe this strangers to friends story!”. But, she’s never really surprised. This is the story of my life. BUT, this story in particular, how I played a role in two people connecting because of me on the other side of the world…  took my “Holy Moly”… to the next level.

Why?
I wasn’t even there!

This is the Story of 2 Women, Bali, Indonesia, Intuition and Crazy Synchronicity… AND…Me. 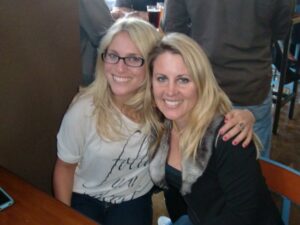 In 2009, after working for 4 years as a Travel RN Recruiter in San Diego,  I put all my energy and intention into manifesting my job layoff.. and it worked. This inspired two things: the “invention” of my first Strangers To Friends card… and… the questioning of “My Purpose”.

As it turns out, a friend from work had a son — who was best friends with a boy — who had a Mom– who was the Founder of Careers With Wings,

Cue in Marcy. In 2010, Marcy became the first ‘Coach” I ever worked with, before everyone had a Coach.  You see, this was the point in my life I began to recognize I had a gift of connection which opened myself to explore more passion in “what do I want to do”. Marcy became my mentor and friend I could trust to help me navigate my thoughts and feelings as I took steps into uncharted territory.

Though Marcy helped me gain clarity, I did in fact accept another Recruiting Job for stability. But, I also did in fact manifest another layoff as my soul still tugged on my knowing I was meant for more.

With another “window of opportunity” to pursue my “purpose” of turning strangers into friends, I decided to leave San Diego create a 6 week road trip to move myself across the country to Wilmington, NC. This photo of Me & Marcy was snapped at my “Going Away” Party days before I hit the road! Over the years, we’ve stayed in touch, continuing to be each other’s cheerleaders. That’s how I knew, via Facebook, Marcy chose to celebrate her 50th this year in Bali, Indonesia! 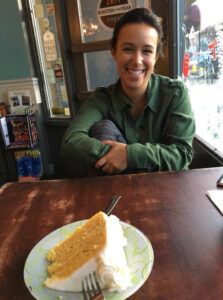 January 2018, promoting an upcoming event I was hosting,  I sent a newsletter to The Strangers To Friends Meet announcing giveaways from a favorite Colorado Local Business, Be Hippy. The next day, I got a message from a gal in Fort Collins asking to be connected with the owner of the company. So, I connected them… and you guessed it, they actually formed a business partnership! But it wasn’t this success that sparked my excitement. As Sarah and I moved from Meetup to Facebook, we learned more about each other. Turns out she’d recently relocated to Colorado via Boston (where I was born). And the woman speaking at her upcoming retreat – was a friend of mine! Clearly, we were meant to cross paths.

This photo of Sarah was taken on Jan 16, 2018, We sat for hours story swapping and salivating over our synchronicity– and this slice of lemon cake ! (Side Note: the man behind us overheard say how good his slice of cake looked– and surprised us with a the huge slice to share!)

But, the real story: this coffee date was the beginning of a beautiful journey. Since then, Sarah and I have collaborated in business and created a super supportive, friendship. Moments she “needs” someone, I’m her go to. The moment I need  a “pick me up”, she seems to know.  That’s why I was so excited and proud of her heading to Bali, Indonesia for the month of November for the trip of a lifetime.

An 18 hour time difference text message pops up from Sarah, “You’re not going to believe this, but I channeled my “inner Carlyn” and met a friend of yours in Bali!”

Wait, what is she talking about?  Who do I know in Bali?

After traveling for 2 weeks in Asia with her job as the Alumni Events Director for Semester At Sea, Sarah was on the last leg of trip, now waiting in the Bali Airport to get picked up to head to her Uncle’s Home in Ubud. Feeling all the feels from a day of travel, she craved connection with someone friendly, perhaps an American Woman,  someone with whom she could relate. Have you ever thought to “randomly” talk so someone across the room? Though I know Sarah as a leader, I also know, she isn’t the gal who typically jumps up to head across the room and strike up “stranger” conversations. That is, until the “What Would Carlyn Do?” thoughts popped into her mind!

As she shared with me, she glanced around the airport and spotted a blonde woman by herself, who she did a double take on because the thought looked just like me! She sat thinking, “I bet Carlyn would walk up to her and stranger to friend her!”And with that thought, she inspired herself to walk up to her and initiate a conversation. Per her story, they immediately fell into a comfortable flow and realizing they shared a lot of small world stories! Both are in the “coaching” world. Both have a passion for travel. Both are spiritual.  But it wasn’t so much what the had in common but, per Sarah, how she felt: at ease. An instant connection. AND the connection boosted her confidence and self trust, knowing her intuition was spot on! Knowing Sarah’s family would be there shortly to pick her up, they began to  wrap up their conversation. Thats when the story went from good to… you’ve got to be kidding me! Without thinking anything of it, Sarah casually said, “I’m so happy I came and said hi! You really do remind me of my friend, Carlyn”.  Cue Marcy looking at her a little funny. Without skipping a beat, she replied, “Wait, Carlyn Shaw?”. Marcy knew Sarah lived in Colorado, I lived in Colorado and how many Carlyn’s in Colorado could there be?

Think about this: Sarah thought “what would Carlyn Do?”, spots a woman who she think LOOKS LIKE ME (on the OTHER SIDE OF THE WORLD), in a small airport, builds up the courage to practice what “Carlyn Preaches”, and as a reward…. the universe hands her MY FRIEND! Imagine if she’d allowed the little bit of fear or resistance to talk her out of saying hello. What a heartbreaking thought!!! It always comes down to the moment we decide to say YES TO CONNECT that the magic happens! Second guessing due to threat is one thing but doubting due to fear of a story you make up in your mind is another. I still shake my head in disbelief: I wasn’t physically there yet my spirit kick started a stranger to friend story, in Bali. I’m beaming with pride.

So, since both of them know the power of “the follow up” they exchanged contact info to connect again in Bali! Now, I don’t know what I love more about this story: how my words of wisdom helped inspired action– or the fact she thought we looked so much alike and THAT’S what ultimately made her go say “Hi”. You see, everything’s connected. People. Places. Timing. Thoughts. All of it. here’s proof: 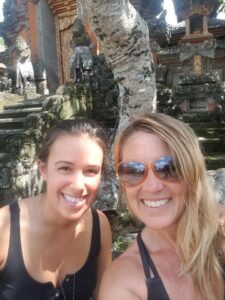 Best part about their connection is it reconnected me & Marcy, too! Having not spoken face to face in several years, she couldn’t wait to tell me her side of the story. So, she asked if I’d like to hop on a Zoom Chat and be interviewed for her new show, The Passion Purpose Academy. Just think, 10 years after I hired her as my “Purpose” Coach and she’s interviewing me to learn about Strangers To Friends. Talk about a Big, Small, World.  Check us out below! As I always say… Cheers to the Journey.