To all my PALS (People with ALS) I say, ‘We Are Living’ – Gary Daitch 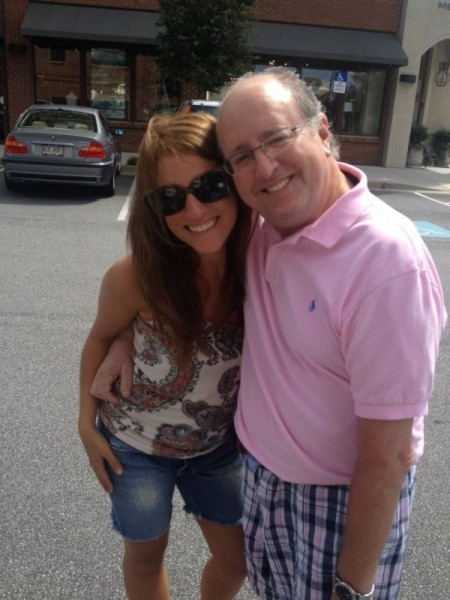 A few weeks ago the letters ALS were not spoken of in casual conversation, which is exactly what Pete Frates intended to change. By now the “Ice Bucket Challenge” has it’s own Wikapedia page and you’ve either dumped a bucket of ice on your own head or have laughed while watching the friend you challenged take the plunge themselves.Â  While Pete’s mission has spread like wild fire, there are many cure crusaders whose efforts are unknown, but who fight the same battle. According to the ALS Society, there are approximately 5,600 people in the U.S. diagnosed with ALS each year, all with their own story. I never imagined that my dear friend, Gary Daitch, would become one of them.

A little background: I met Gary via my Mom in 2005.Â  Gary’s love for laughing was a quality he projected into the world long before his ALS Diagnosis. As our friendship grew, so did our support for each other. Gary stayed up-to-date on MS research and always got excited to deliver promising news to me when he’d check in to see how I was feeling. And, like all his loved ones, I anxiously awaited my birthday phone call from him, or rather, from Captain ZOOM! In his Captain ZOOM voice, Gary called friends and family to sing his own rendition of Happy Birthday, always making us laugh. Not only was Gary goofy, but he was an amazing dancer! To say that Gary loved to dance is an understatement. From his Disco ways in the 1970’s to Shagging his way into his final days, Gary’s heart was on the dance floor. He was an active member of various Shag Clubs around the Southeast and competed in multiple competitions, including winning 1st Place in an Amateur Shag Contest in Charleston, SC. (Click Here to Watch His Winning Moves)

What started off as a twitch in his finger that went to his right arm, then left, was initially diagnosed as a pinched nerve. But in August 2011, the scheduled surgery to repair the nerve was quickly cancelled due to unimaginable ALS Diagnosis, at the age of 61. Within the year, Gary’s arms hung by his side. When we went for a walk, I put them in his pocket so people didn’t stare when they dangled without his control. Imagine what that means, you are completely healthy and sharp in the mind, but all of a sudden you need assistance doing the most basic activities such as eating, dressing and bathing. But even with his daily struggles, Gary wore a smile on his face. With strings tied to handles and rubber tubes attached to switches, he’d use his teeth to open drawers and turn on the lights.Â  Family rallied to his side as needed and he was blessed with the love and patience of amazing caretakers. In addition, The ALS Society extended his life line by providing him a voice activated lap top and mobile phone, only fitting for someone who was known for his gift of gab.

Fast forward to May 21, 2014. Gary felt it was part of his purpose to share his story, and was honored to be invited to speak at an ALS Luncheon in his current home city of Atlanta, GA. He was grateful for any opportunity to address ALS supporters and ALS PALS (People with ALS). By this point, his arms were 100% paralyzed, his neck noticeably weaker and he needed a power chair to save energy in his legs for the times he needed them most…to dance. Gary can be quoted from this speech as saying, “I ain’t complaining. As long as I have my legs to dance I am happy. Anyone can feed me, dress me, etc, but no one can dance for me”. Gary truly considered himself lucky. With confidence, Gary referred to himself as the “CEO of his life”. If anyone showed sympathy for his diagnosis, he’d quickly remind them he was “too busy living to worry about dying”. He went out of his way to connect with others living with ALS, offering his prayers, his faith in finding a cure, but also extending a life long friendship.

No one in attendance of the luncheon could have guessed that would be Gary’s final speech. The term “blessing in disguise” comes to my mind when I talk about Gary’s passing. You see, his biggest fear was being completely dependent on his family and/or a machine, to live. In a rare twist of fate, Gary’s family would no longer bare witness to him slowly losing his life to ALS. After a memorable night watching a dance competition with close friends, Gary tripped and fell on concrete. To most, this is non life threatening. However, without his arms to protect him, Gary died from injuries to his head he sustained from the fall,Â  5 days after his speech, on May 26, 2014. Memorial Day.

Edna Buchanan is quoted as saying, “Friends are the family we choose for ourselves.” Gary was family to me. He loved me like a Daughter and I loved him like a Dad. Over the years I also became close with Gary’s daughters, Elizabeth an Lauren. As if this blog post is ‘right on time’ I found out last week that Elizabeth and Lauren formed Team Captain Zoom in Gary’s honor and are walking in the Atlanta ‘Walk to Defeat ALS’ on Sept. 13, 2014.Â  All money raised will go to the local chapter that provided Gary with his care services and to the Doctors at Emory University that did the best they could to give Gary guidance throughout his journey.

If you’ve already donated to the Ice Bucket Challenge, thank you. If you want to give more, THANK YOU! If you feel drawn to Gary’s story and want to donate in his honor, thank you from the bottom of my heart.Â  My gift to him is this blog post. And I hope after reading my story you feel more connected to this cause. Please CLICK HERE to read Elizabeth’s Story and consider donating in Gary’s Name for her walk on Sept. 13th. On behalf of Gary and his loved ones, we appreciate your compassion and kindness.

According to the ALS Society, every 90 minutes a person in this country is diagnosed with ALS and every 90 minutes another person will lose their battle against this disease. ALS occurs throughout the world with no racial, ethnic, or socioeconomic boundaries. Presently there is no known cause of the disease though support is bringing researchers closer to an answer. In the mean time it costs an average of $200,000 a year to provide the care ALS patients need. Help make a difference and donate or join a walk today.