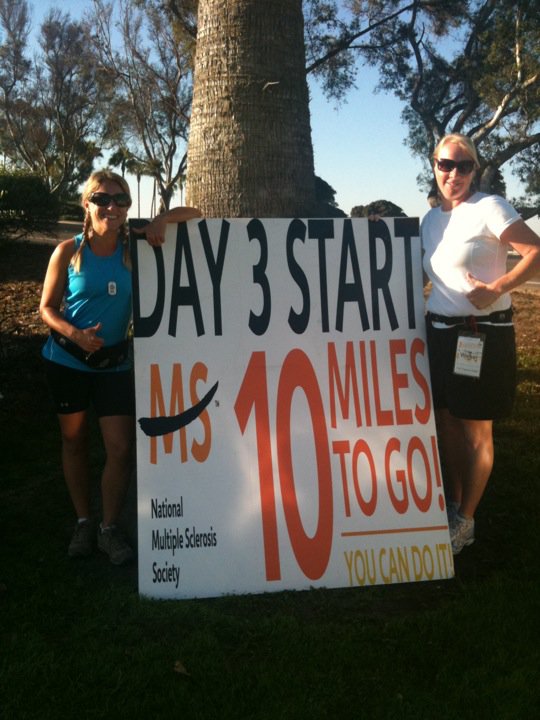 I truly believe that the greatest gift a friend can give… is their friendship. The story of how Vanessa and I crossed the line from Strangers to Friends is one that has changed both of our lives for the better. Over the past few months, I’ve asked friends to share one of their own “Stranger to Friend” stories with me so that I could post it on my site as a “Feature Friend Story”. To my surprise, on my 33rd Birthday, Vanessa sent me a story; the story of US. Below is her version… an incredible story of overcoming self doubt to accomplishing a great feat. Thank You, Vanessa! Our friendship is one that I’ll always and forever cherish; this story means the world to me 🙂

The start of the MS Challenge Walk

…..I am a little ashamed of how long it has taken me to get this story locked into the Strangers To Friends site but from the other stories I have read on the site, I find that I am not the only one that believes things happen when they need to, timing is everything….
This is the story of how Carlyn Shaw went from being a stranger, just a voice on the other end of the line, to my inspiring friend. In the fall of 2008, I was looking to leave my current job as an RN in a doctors office to explore something more lucerative, as well as challenging. So I started investigating the world of travel nursing.Â By some amazing stroke of luck, or divine intervention, I was connected to Carlyn as my recruiter.
At this time, I was working on all areas of my life……in the process of becoming a stronger, more confident person, and learning more about who I was.Â I was in need of something drastic to stir things up a bit but, simply said, I was terrified of the prospect of traveling to a far away place, by myself, not knowing a single soul. However, because of how amazing, supportive, and overwhelmingly convincing Carlyn can be, she wouldn’t take no for an answer and soon I found myself driving from North Carolina to the big ol’ state of Texas.
As it turned out, Carlyn and I would only be in the recruiter/recruitee relationship for a very short time.Â  Her path was leading her other places as well.Â Reluctantly, I found another recruiter and ended up coming back to North Carolina, working for a few months, unhappily, only to find myself in the job I am in today. And this is where I was meant to be. I wouldn’t know it until months later, but going to Texas was one of the best things that could have happened to me. That person that I was trying to find, trying to become, started taking shape while I was there.Â And if it wasn’t for Carlyn convincing me to go, that above everything else, it would all be okay, I might not be where I am today. Again, timing is everything.
For the next 2 years, Carlyn and I stayed in touch throughÂ email, facebook,Â and a periodic phone call, becoming friends….I had a sideline view of all the things she was experiencing and doing in her life and it made me want to experience new things as well. Did I mention she was inspiring? One of those was the MS Challenge Walk…..50 miles over three days in San Diego.
SO…..NEVER having been to San Diego, or California for that matter, NEVER having raised money for a cause, NEVER having walked 50 miles, and NEVER having met the one and only Carlyn in person……I signed up for the walk, raised money (with Carlyns help of course), and ventured off to the west coast (I was traveling the country alone, again,…..but this time with a heck of a lot more confidence)!!!!

I was nervous (but excited) to meet Carlyn face-to-face for the first time. But, as soon as she pulled up to the curb at the airport, it was like we hadÂ done it a million times before. This “my friends” is the power of the human connection that she talks about.Â You take two people who live on opposite sides of the USA and wha-lah, STRANGERS TO FRIENDS!!! (As you can imagine, I had an amazing time in San Diego. A trip that will stay with me forever.)
Now as fate would have it, Carlyn has moved to my neck of the woods,Â to Wilmington, NC.Â  Who would have thought??Â So now, I hope to be able repay her in some way for all that she has helped me accomplish. I am proud to be part of a friendship that is a by-product of her passion, her mission to connect us. She continues to inspire me and I hope to learn and meet more through her example.